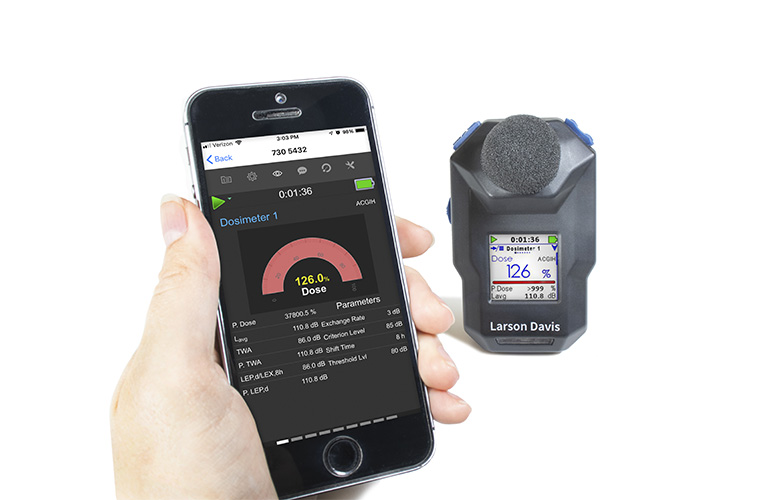 Noise Dosimetry brings with it many different options for which standard to follow and how to calculate noise dose. We've brought together some common industry terminology to help you better understand noise dose measurements. If you still have questions or have suggestions for additions to the glossary, our team of technical experts is always ready to lend a helping hand - feel free to get in touch today.

A time-weighted average exposure to noise over a period of time (as opposed to a noise level measured at a specific point in time). For this measurement, any noise level under the Threshold Level is ignored and the exchange rate is taken into account. When the exchange rate is 3 dB, TWA(8) is the constant sound level over an 8-hour period that produces the same amount of acoustic energy as the actual sound level, only taking into account sound above the threshold level.

For example, in OSHA regulations, the exchange rate is set at 5 dB. So, when looking at OSHA Hearing Conservation regulations, a worker may be exposed to 85 dB for 8 hours, but when the sound level is increased to 90 dB, the allowable exposure time is halved to 4 hours.

A limit set on exposure to noise in an occupational environment. Expressed as a maximum time-weighted average noise exposure over a given period of time. According to OSHA, when the Exposure Action Value is exceeded, employers must develop and implement a plan to monitor worker noise exposure. The EAV is set by OSHA at 85 dBA. This means that when the 8-hour time-weighted average noise level for a worker reaches 85 dBA, the employer has to take steps to monitor exposure levels and establish a hearing conservation program.

The threshold level is applied in hearing damage risk assessment. According to the ANSI S1.25 standard, it refers to the A-weighted sound level below which the dosimeter produces little or no dose accumulation. For that reason, measured sound below this level will be disregarded. The current OSHA threshold level is 80 dB.

The maximum time-weighted average noise level an employee may be exposed to in an 8-hour day. This value varies according to which guidelines or standards are applicable.

Limit value set by NIOSH to protect workers against the effects of excessive exposure to noise in the workplace. An 8-hour time-weighted average noise level of 85 dBA or greater for a worker is considered hazardous. NIOSH's REL assumes an exchange rate of 3 dB, or a halving of allowable exposure time for every 3 dB increase in noise level.

Legal limit established by OSHA in the United States for exposure to noise in the workplace. The PEL is set at 90 dBA time-weighted average over an 8-hour day. This would be considered a 100% dose. The exchange rate established by OSHA is 5 dBA. For every 5 dBA increase in noise level, the allowable exposure time is halved. Mine Safety and Health Administration (MSHA) uses the same PEL limit and exchange rate. When the PEL is exceeded, engineering or administrative controls must be put in place and hearing protection is required.

The time required for a continually applied sound of the selected criterion level to produce a dose of 100%. Criterion duration is typically 8 hours.

Example: If the criterion level = 90 dB and the criterion duration is 8 hours, then a sound level of 90 dB for 8 hours will produce a 100% Dose.

Similar to Leq in that the total sound energy is integrated over the measurement period, except that instead of averaging it over the measurement period, a reference duration of 1 second is used. It can also be thought of as the constant sound level that has the same amount of energy in one second as the total original noise event. SEL is often used as a way to compare the noise exposure from two noise events that have different durations.

The following equation shows that the sound pressure is squared and integrated over a specific period of time (T2-T1). 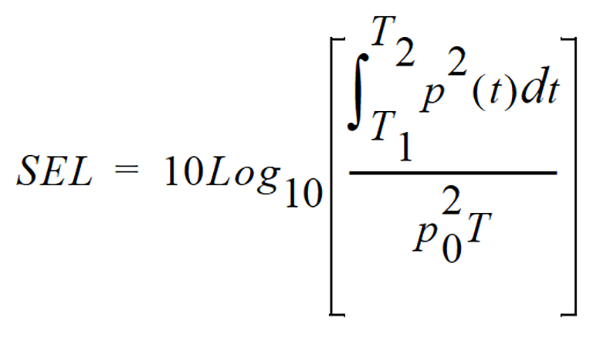 Imagine comparing total energy between events with different time durations, such as:

It's convenient to have one metric to compare the total energy of individual events taken over a long period of time.

The allowed time of exposure to sound that a constant A-weighted sound level in a chosen Criterion Level, Criterion Duration, and Exchange Rate. The equation for Ti is

This means that if a person is in this area for 2 hours and 31 minutes he will have accumulated a Noise Dose of 100%.

It is the constant sound level that would expose a person to the same Noise Dose as the actual (unsteady) sound levels. According to the ANSI S12.19 standard, the equation for it is

NOTE: This definition applies only for a Criterion Duration of 8 hours.

It is defined in ANSI S1.25 as “the change in sound level corresponding to a doubling or halving of the duration of a sound level while a constant percentage of criterion exposure is maintained.” The rate and the factors are given in the table below.

The time period of measurement. It applies to hearing damage risk and is generally expressed in hours.

The Average Sound Level calculated in accordance with the Occupational Safety and Health Administration Exchange Rate and Threshold Level.

The Single Event Noise Exposure Level is the total sound energy over a specific period. It is a special form of the Sound Exposure Level where the time period is defined as the start and end times of a noise event such as the passing of an aircraft or automobile.

Sound Exposure is the total sound energy of the actual sound during a specific time period. It is expressed in Pascals squared seconds, or Pascals-squared hours. The following formula describes exposure in terms of E, where pA is the sound pressure and T2 - T1 is the Measurement Duration (specific time period). 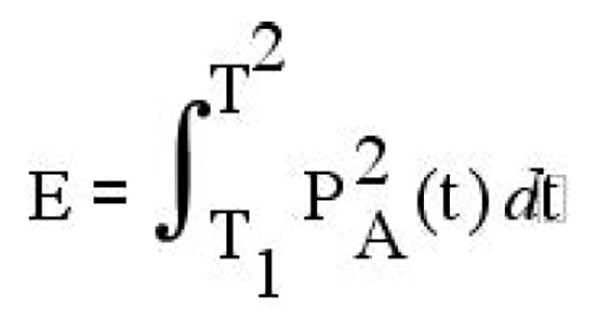